Despite pandemic, Winchester farm presses on with modern-day barn raising

Wright-Locke Farm put the roof on its new 8,000-square-foot barn in February. The mechanical systems and doors should be installed by the end of this month. JONATHAN WIGGS/GLOBE STAFF

At Wright-Locke Farm, a 20-acre patch of paradise 8 miles north of Boston as the crow flies, a planer screeched, halting conversation. It was the second week in a modern-day barn raising.

A tour of the nonprofit Winchester farm in late February revealed a timber-frame building in progress. Exposed beams pushed against the cobalt sky. Sawdust fell from the rafters like confetti.

But it was too soon for a party. Within weeks, the novel coronavirus arrived in Massachusetts and Governor Charlie Baker issued his stay-at-home advisory. There’s more money to raise ― about $700,000 — to meet the $3.35 million goal for the project, but the pandemic has made meeting with donors all but impossible.

Yet organizers remain undeterred in their drive to finish the all-seasons barn, which they say will help secure the farm’s future and maintain its 382-year legacy.

“Winchester is a very densely developed suburb,” said Philip “Archie” McIntyre, executive director of the Wright-Locke Farm Conservancy, which oversees farm operations. “This is our only remaining farm, so it’s really struck a chord in the community as a treasured resource that’s not only open space but it’s active open space — people can come and get involved.”

The new 4,500-square-foot barn will have eco-friendly bathrooms, a commercial teaching kitchen, event space, and heat, allowing the farm to move from a seasonal schedule to year-round operation. The farm plans to expand its educational programs and book more weddings and other revenue-generating events.

Though construction has slowed due to the pandemic, social distancing protocols have kept things moving. The roof is up, and mechanical systems and doors should be installed by the end of this month.

Nor has the farm shut down completely. True, its spring educational programs and events are canceled through June, but “casual visitors” (with masks while social distancing) stroll the grounds and Farm-to-Go Meals have families pulling up Friday afternoons to pick up their pre-paid online orders that are popped in the trunk.

“This is a period we’re going through,” McIntyre said of the protocols enforced under the pandemic. The barn “is going to be transformative in terms of our own financial strength and stability. We still see it that way.”

In 2007, the town of Winchester purchased the entire property for $14 million and leased 7.5 acres, including the farm’s historic buildings, to the Wright-Locke Farm Conservancy.

In 2015, the Wright-Locke Land Trust raised $8.6 million to buy the 12.5 acres of remaining land from the town. “We were able to preserve the land in perpetuity,” said McIntyre.

“It has a very strong link to our past and it also creates a connection to local food and the importance of stewarding the land and the environment — all of this is kind of restorative and healing, if you will,” he said. “That connection is really fundamental and beneficial to all the members of the community.”

While the original barn, built in 1827, has been a popular venue for the farm’s speaker series, weddings, and parties, it has its limitations.

“Nobody wants to be in that barn in January,” said Sally Quinn, president of the Wright-Locke Land Trust.

McIntyre and Quinn decided years ago that an all-seasons barn to host events year-round was key to bringing in new revenue. Products made in the kitchen could be sold at the farm stand and donated to food programs.

Now, everything is being discussed through the lens of “social distancing.” McIntyre has joined forces with nearby farms and New England vendors to provide the Farm-to-Go meals. Soon, the program will be revamped to Farm Stand Plus, offering more locally sourced staples like cheeses, meats, produce, and farm products.

“We’re kind of serving as a food hub,” said McIntyre. Customers place orders by Wednesday night for the Friday pickup. The farm stand will operate this way through the end of this year’s season.

“People need to eat,” said McIntyre. “And local fresh organic food, seems to me, will be very much in demand.”

Wright-Locke Farm sits along Ridge Street. The dirt driveway leads past the Federal-style farmhouse to a cluster of white clapboard buildings. Walking trails skirt a pond and head into conservation land. There are goats and chickens. Oak and maple trees dot the hillside.

“It’s a great opportunity to learn about a farm and such a special place so close to Boston,” said Winchester resident Erin Dubovick, who was out walking with her three young daughters in late February. “So few and far between ― so peaceful here.”

Situated on a flattened rise in the northeast corner, the all-seasons barn looks south to the old barn and the sprawling farmland. To the west is the cistern on the hill.

“It’s the best view of the farm,” said Quinn, looking out from where three double doors will open to grass and a patio.

Hundreds of individuals already have contributed to the barn’s capital campaign, giving anywhere from $25 to $1 million. The farm is still fund-raising and accepting in-kind donations of equipment for the teaching kitchen and event space.

“I think there’s a much wider perception now in town [that the farm] is a real asset,” said McIntyre. “We’ve come a long way, but we still have significant challenges in front of us. We’re confident this will work out.”

Naomi Kooker can be reached at naomikooker@gmail.com. 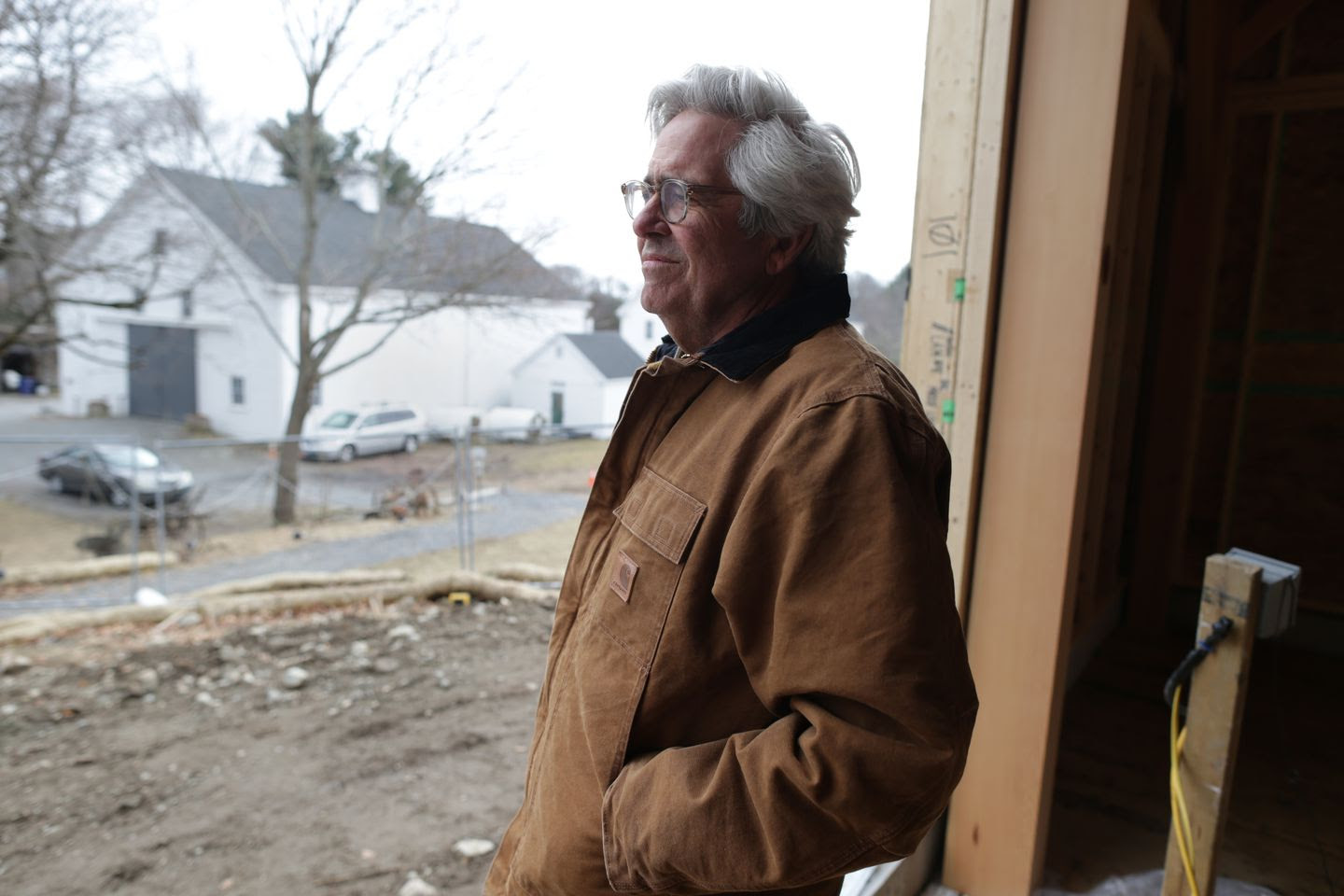 “Winchester is a very densely developed suburb,” said Philip “Archie” McIntyre, executive director of the Wright-Locke Farm Conservancy, which oversees farm operations. “This is our only remaining farm, so it’s really struck a chord in the community as a treasured resource that’s not only open space but it’s active open space — people can come and get involved.” JONATHAN WIGGS/GLOBE STAFF